Over the last hundred years, many people have found that learning the Alexander Technique is an effective method to use in order to reduce chronic and recurrent back pain and to enhance other aspects of musculoskeletal health. However, there were no major research projects on the topic until recently.

In August 2008, a major research paper was published in the British Medical Journal, the BMJ, that supports this theory. The results of the ATEAM trial have been heralded in the media and the implications of the research have been discussed by many eminent medical professionals, by Alexander Technique teachers and by various health organisations.

I will only outline the main findings of the research here but if you are interested, you may find the full research article via the link to the BMJ. 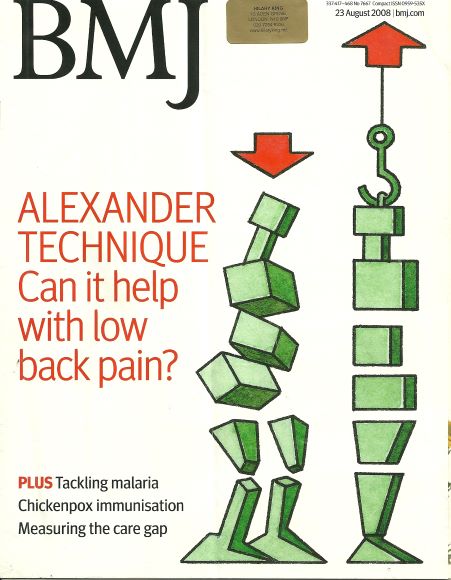 The ATEAM research trial was funded by the UK Medical Research Council (MRC) and the NHS Research and Development Fund.

Professor Paul Little, an MRC research fellow in Primary Care, lead the research trial from Southampton University along with Professor Debbie Sharp, Professor of Primary Care at Bristol University. The Society of Teachers of the Alexander Technique, STAT, were represented by Kathleen Ballard and Frances Oxford.  They were involved in the ten years it took to plan and complete the research and were part of the trial’s management team, which included a Professor of Health Psychology amongst others.

Details of the Research Trial

The research compared the effectiveness of different treatments for low back pain. The Alexander component was taught by 59 STAT registered teachers, including myself, all of whom had been teaching for three years or more. The teachers used  gentle hands-on guidance and verbal instructions in 1:1 lessons. These were designed to help the participants recognise and then avoid movements and behaviours that resulted in back pain, as they sat stood and walked around. Participants were also taught a lying down procedure which they were asked to practice daily.

The participants taking part in the trial were 579 NHS patients from 64 GP surgeries around the UK, all of whom had chronic or recurrent, non-specific low back pain. These participants were allocated groups: 144 received normal GP care and advice and formed the Control Group; 147 were given 6 massage sessions; 144 had six Alexander lessons; 144 had 24 Alexander lessons.

Half of the participants in each of these groups were allocated, on a randomised basis, a GP prescribed prescription for aerobic exercise.  This took the form of 30 minutes brisk walking per day, or something similar, plus some behavioural counselling from a practice nurse.

The Roland-Morris Disability Scale was used at three months and one year, to establish the number of activities that participants found impaired by the levels of back pain they experienced. This scale is the ‘industry standard’ outcome measure, used to establish levels for back functioning and the levels of disability that chronic back pain creates.  The number of days each person experienced pain was also recorded.

The results of the ATEAM trial are exciting for both Alexander teachers and for the many people who suffer from lower back pain but have not known how to help themselves effectively. As one of the STAT registered teachers selected to take part in this research, I awaited the results of the study with some interest.

Improvements in Back Pain Levels

That is good news for anyone with chronic back pain! The addition of some prescribed exercise, to be taken after the Alexander lessons, made no significant improvement to this group’s level of back pain. This suggests that their general level of use and co-ordination, after having 24 AT lessons, had improved so much that exercise could offer no extra benefit to them.

Importantly, there were no adverse effects reported during the research trial by the 288 subjects who were allocated AT lessons. Between them, these participants had 2,400 lessons.

Another significant result was that the long-term improvements in back pain, functioning and quality of life shown in these AT groups, is unlikely to be due to any placebo effects resulting from the subjects receiving individual attention and touch, with the hands-on work they received in their lessons. The researchers concluded that the statistically significant improvements that were shown after one year, came about because people had learned the Alexander Technique and had applied it in their lives.

Professor Little said that “This is a significant step forward in the long-term management of low back pain. The results of this study reveal that the Alexander Technique can help back pain. It probably does this by limiting muscle spasm, strengthening postural muscles, improving co-ordination and flexibility and decompressing the spine. This means that patients could have fewer activities or functions limited by back pain.”

The conclusions, as set out in the research paper were:

‘One to one lessons in the Alexander technique from registered teachers have long term benefits for patients with chronic back pain. Six lessons followed by exercise prescription were nearly as effective as 24 lessons‘.

Simply, to quote the author Roald Dahl (who was not part of the research programme):          ‘The Alexander Technique works… I recommend it enthusiastically to anyone who has neck pains or back pain’

Teachers were asked to give verbal instructions to the patients, alongside their hands-on teaching, which is something I always do when I teach. We taught the patients on a 1:1 basis, so they had our undivided attention, which is the standard and best way to learn the Technique. Teachers completed report sheets about the range of AT procedures included in each lesson and about the progress of the pupil. The reports were analysed by the research team and included in the research data.

Pain is a good motivator and I found the patients on the ATEAM research trial were keen to learn the Technique and to take it on board, in order to relieve their back pain. However, it is strange to refer to participants as ‘patients’ as we normally refer to the people we teach as ‘pupils’. The Alexander Technique is a learning procedure of psychophysical re-education, not a treatment as such. The learning process is a partnership between teacher and pupil, requiring the pupil’s active participation in lessons. The aim is for them to use what they learn during everyday activities.

Traditionally, STAT has recommended that a course of at least 20 Alexander lessons is required, for people to bring about significant changes to their body use and to develop a tool that can be used throughout their lives. Interestingly, the ATEAM research makes it evident that even just six lessons can be worthwhile and people can find a significant level of relief from back pain if they learn, practice and apply the AT during their activities.

If a pupil comes for AT lessons and just wants us to ‘make them feel better’, they don’t progress in their learning. This is unfortunate, because they never really learn AT work properly and therefore see few changes taking place in themselves. However, when pupils become actively involved in their learning and apply the AT to everyday activities, they frequently make profound changes to the way they act and move in the world and are able to reduce the number of days they have back pain. Importantly, Alexander pupils can also learn to avoid the recurrence of such pain.

It is gratifying that the improvements in low back pain that teachers have frequently seen in Alexander pupils over the years, has now been given some scientific validation. It is to be hoped that the ATEAM Trial will encourage further research into areas where experience has shown that the Alexander Technique can also be used. For instance to help people with conditions such as acute back pain, RSI and breathing problems.

Dr Stephen Vogel, head of research at the British School of Osteopathy and a member of the NICE guideline development group, said the ATEAM research was an “unusually good piece of work”, which is praise indeed. Dr Vogel suggested that the Alexander Technique might be considered in the NICE guidelines on back pain, which will be published in 2009, if it fell within the scope of the NICE guidance. (Pulse ~ 21 August ’08)

If the Alexander Technique could become available through the NHS and if more insurance companies would cover the cost of lessons, this would be very much welcomed.

“I started Alexander Technique lessons with Hilary during a very stressful period at work when I was experiencing low back pain and sore shoulders. Now, nine months later, I attend only once a month and have no back pain. More importantly, I feel I have learnt to use my body in a different way and one in which I have greatly decreased my chances of developing immobilizing disability as I get older. I have found Hilary to be a sensitive, conscientious and effective teacher”.