A BBC article discusses a Research Study by scientists from Scotland, Canada and Iceland which has been published in the journal BMC Evolutionary Biology, which suggests that some peoples’ lower back pain may be caused by the shape of their vertebrae.
When the scientists studied the skeletons of ancient humans, chimpanzees and orangutans they found that some human skeletons that showed evidence of intervertebral disc herniation, had vertebrae more similar in shape to chimps than to other humans without disc damage. Chimps do not walk with an upright stance as we do and the argument put forward by the researchers is that in some people, the evolutionary development of the spine contains “pathological vertebrae” which “may be less well adapted for walking upright”. 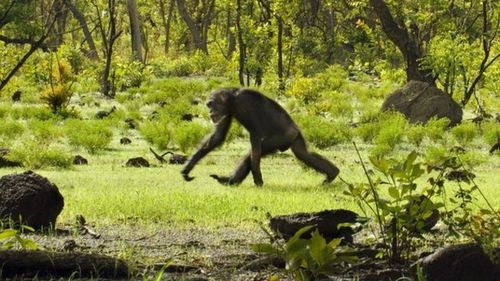 Photo: BBC
It may well be that some people are genetically more predisposed to having lower back pain than others but there seems to be little mention in the research paper of the impact of our body-use and habits of mis-use that contribute to back problems such as a ‘slipped disc’, other than saying that they appear to be caused by strain and stress on the pathological vertebrae which cannot support the downward compression, so cannot protect the discs. If some people do have spines that are more vulnerable to the sort of compression and distortion that contribute to having a ‘slipped disc’, then it is surely even more important that they learn to use their bodies in the most aligned and effective manner, in order to protect the discs and prevent their herniation.
Habitual Mis-use
When we curl over, the vertebrae and discs contract down on one side and can push the soft tissue of the discs so that they bulge out, or herniate. This is not just a problem for the lumbar region of the back but we can get slipped discs in the neck and other areas of the spine as well, if they are continually compressed with habitual mis-use, or as the result of an accident. This wooden dummy does not have vertebrae but the discs of wood representing the torso can be seen to be angled, narrowed and compressed on one side, just as the vertebrae and the discs between them would be.
Monkey Position
This research paper gives a new slant on F M Alexander’s concept of using ‘monkey position’ or ‘the position of mechanical advantage’ as he called it, which allows us to bend forwards from the hip joints, thus allowing the spine to remain lengthening – which protects the vertebrae and the intervertebral discs from compression and distortion. You can see in this photo which is illustrating ‘monkey position’ the wooden discs forming the body are more evenly spaced and opened out – if these were our vertebrae, you can see that this allows more space between them, which would not compress the discs in the same way as above.
Nature or Nurture?
This debate about the impact of our genetic inheritance and the impact of our learning throughout our lives will continue. I suggest that for most conditions, it is an interplay between both that we have to live and work with. Fortunately, most of us do have choices available to us about the way we live, use, mis-use or even abuse our bodies. As the BBC puts it ‘Back pain is a very common issue in humans’ – but many hours lost at work through back pain could be avoided, if people learned how to move differently, so that they protect their backs as they sit, walk and work throughout the day. It can be done, as the ATEAM Research Trial showed, which found that Alexander Technique lessons significantly reduced chronic lower back pain and was more effective than either massage or a Doctor’s exercise prescription.

3 thoughts on “Lower Back Pain linked to Chimpanzee Spine Shape?”