Safety First – Maintain Awareness
There have been so many accidents, injuries and deaths of cyclists in London recently and I believe that a lack of awareness, in both drivers and in cyclists, is part of the problem – and we can all do something about this. There are too many stories that cite drivers using their mobile phones and not paying attention to the road, for instance, so they drive into cyclists and often kill them – we all know that this behaviour and lack of awareness is dangerous. One pupil was referred to me by her Doctor for Alexander Technique lessons, because she had painful shoulder and rib injuries, plus a high level of anxiety, after being knocked off her bike by a thoughtless driver. In one sense she was lucky though, as the driver’s insurance paid for her AT lessons.
Many cyclists appear to be unaware of their surroundings too! 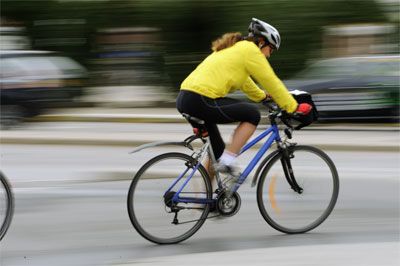 Photo: motortransport.co.uk
Look Where you are Going
I have seen people texting on their mobiles and wearing earphones whilst cycling, so they cannot see or hear any signals from the traffic around them! This cyclist above is riding fast but ‘sensibly’, leading with her head into movement and her back is lengthening – so far so good. But where is she looking? She appears to be looking at the road below her, so I wonder, just how much of the traffic around her can she see and be aware of? Surely this way of cycling has to be dangerous! The only way she could see in front and around her from this position, is to lift her face and pull her head right back, thereby crunching her neck and cervical vertebrae and probably giving herself neck problems. If her handlebars were a little higher and her body more upright, she could see ahead quite easily.
This cyclist is not alone unfortunately and many people cycle with their bodies much lower and pulled down, particularly the more end-gaining cyclists who are focussed on going as fast as possible to their destination. This may be good for their hearts but it’s dangerous in other ways.
London Cyclists
Photo: greatwen.com
The group norm here seems to be to look down onto the road in front!
If you look at the photo above carefully, you can see that only a couple of cyclists in this London group appear to be looking out and about! The rest look down rather tensely, with eyes glazed-over, which is risky to say the least. It is so easy to get caught up in riding as quickly as possible from A to B, that it is easy to lose awareness of the actual process of riding and what’s going on around you. This photo is in stark contrast to the photo of some Danish cyclists below, who are alert and poised as they ride in the city. They are able to look where they are going because they are using a much more upright position with higher handlebars, so they are comfortably looking ahead as they ride. They also look less stressed which must have a lot to do with the fact they have proper cycle lanes to use but I believe that the way they are riding helps them too.
Photo: The Times
The Way We Ride Matters
I have worked with many AT pupils on what to think about when riding a bike or driving a car. I sometimes sit people on the exercise bike for part of their AT lesson, not to see how fast they can cycle but to explore how they sit and what happens in their body when they start cycling. All sorts of unhelpful habits are revealed and then I can help people to let go of them so they cycle with improved use. A pupil’s comments a couple of days ago made me think about these issues again:
“When I think about Alexander Technique whilst driving and cycling, I am more alert and more able to respond to traffic – and I don’t get back pain any more”
The Alexander Technique Can Enable Us to Cycle More Safely.
It’s not just about the position we sit in that matters but that is a good starting point. Being conscious of whether we hold the handlebars (or steering wheel) with awareness, or grab it with a strong grip, is one point. When cycling, do we just think of pushing ourselves forwards with our legs, or do we think of leading with our head to aid the forward momentum?  Do we have so much weight going through our arms that our shoulders are hunched and ache with tension and our wrists are getting painful?
As drivers and cyclists, are we so caught up with end-gaining and ‘getting there in time’ that we lose awareness of how we are riding or driving right now and what is happening around us? This is the route through to trouble – but we can choose
to change ourselves and our behaviour, so that we can remain mindful not only of our body-use but also of our surroundings during these activities.
In Alexander lessons we can learn to minimise tension and help ourselves keep calm. We can sit in a manner that lets us see where we are going without hurting our necks, protects our backs and allows us to see around and make use of our peripheral vision, which will help keep ourselves and other people safe. Surely this is a much more enjoyable way to cycle and to drive, as well?