‘Sir Colin Davis with Love’
The BBC produced a moving tribute to Sir Colin Davis, with two programmes, the first showing him conducting part of Beethoven’s Missa Solemnis with the LSO in 2011, followed by an interview with John Bridcut, made shortly before Sir Colin died.
For anyone who knew Sir Colin, and anyone interested in conducting, this is a programme to watch and is still available on iPlayer until 10 May ’13 :
http://bbc.in/12d0cLK
Sir Colin was touchingly frank about his life, his conducting and his thoughts about dying. The programme mentioned how he was ‘almost self-taught’ as a conductor and how, as a young man in the 1960’s, he was fierily passionate when conducting. As an Alexander Teacher, I was pleased to hear Sir Colin recounting how the eminent conductor Sir Adrian Boult came to speak to him after an orchestral performance and gave him some valuable advice about the way he had been conducting – ‘My dear boy, you’ll be a cripple if you go on like that! You must go and see Dr. Barlow’  ( Dr Wilfred Barlow trained as a teacher with FM Alexander and taught near the Albert Hall and the Royal College of Music, and musicians were amongst his many pupils ) – and that was how Sir Colin ‘started my acquaintance with the Alexander Technique’.
The AT became an important part of Sir Colin’s life, with both he and his wife Shamsi (an Alexander teacher) supporting the Royal Academy of Music Alexander Technique fund for many years and they were both patrons of the Friends of the Alexander Technique charity.
If you read the comment on this entry by Robert Rickover, you can follow the link to hear an extended, philosophical and fascinating interview with Sir Colin Davis (and this will be available for a long time ).

It was with sadness that I heard that Sir Colin Davis, the internationally renowned conductor, has died at the age of 85 (14 April ’13). Sir Colin lived locally, in Highbury.
I remember him well from when I danced in the Sadler’s Wells Opera Ballet during the 60’s, when he was the musical director of the Opera Company. Performances and rehearsals that Sir Colin conducted always had an extra edge of excitement about them, as he was an inspiring and charismatic conductor who wanted the very best from everyone under his baton – and he did not suffer fools gladly! Some people described him as a ‘firebrand’ in those days.
Sir Colin was well respected internationally, was the principal conductor and President of the London Symphony Orchestra for many years, plus conducted the orchestras of the Royal Opera House and many other famous institutions.  Sir Colin held the International Chair Conducting Studies at the Royal Academy of Music for 25 years.
Less well known is that Sir Colin was an advocate of the Alexander Technique and must have encouraged many musicians to take Alexander lessons. It has been said that over the years Sir Colin mellowed and it may well be that the Technique helped him to bring about this change?
Sir Colin’s second wife, Shamsi, trained as an Alexander Teacher a few years after me at Misha Magidov’s AT Teacher Training Course. Shamsi Davis later taught the AT at the Royal Academy of Music and over the years, both she and Sir Colin donated a substantial amount of money to the RAM Alexander Technique fund.
Sir Colin Davis has left a rich legacy of music making and will be very much missed. 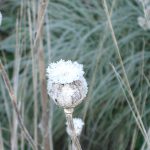 There are wet leaves on the paths and the first wintry frost is here, so it’s time to take care on pavements! If you are afraid of falling on ice, it is tempting to tense up all over but remember, you will have more sense of your balance and more control over your movements if you refuse to tighten but walk in an alert and free manner, using all you have learned in your Alexander lessons.

One wintry day last year when the pavements were covered with ice, I was tempted to tighten up my legs and hips in order to keep my balance. Then I saw a teenager running with ease along the frozen pavement, illustrating the fact that poise and free movements are the best way to maintain ones balance, even on slippery ice.

We do need to keep warm in order to look after our health but perhaps we can do our bit for the environment and start off by wearing an extra layer of clothing, rather than turn the heating up without thinking. Tensing up our our arms, shoulders and lower back against the cold really doesn't help to us keep any warmer, in fact it tends to restrict our circulation, which could make us feel even colder.
Also, have you noticed the weight of a winter coat? How much heavier winter clothes are than summer ones! It's tempting to let the coat's weight drag us down but if we gently maintain the length in our spines and allow an upward anti-gravity energy flow through us, we can still be poised - and somehow the coat tends to feel less heavy.

Give someone the chance to enjoy some Alexander Technique Lessons

Alexander Technique Gift Certificates make great Christmas, birthday or other presents!  They are available for 1:1 Lessons or Introductory Workshops with Hilary in Harringay, N4.

The Gift Vouchers come in various denominations and can be custom made to suit you, with the name of your friend added onto the Certificate.

You could buy a Voucher for: 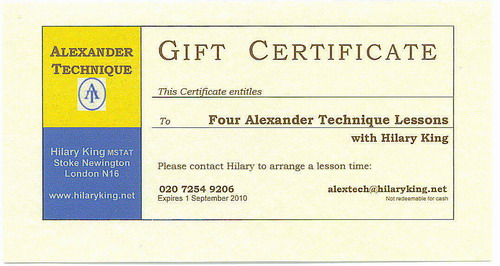 New US Guidelines for the Treatment of Lower Back Pain

These new guidelines are medically-based, as would be expected but there is a welcome emphasis on encouraging the reduction of invasive procedures and the use of steroids and narcotics to reduce the symptoms.

I haven’t read the whole paper but I thought it was unfortunate that this abstract makes no mention of the use of the Alexander Technique to treat back pain – which has been shown in a major Research Trial published in the BMJ in 2008, to be more effective in helping people with chronic lower back pain than were massage or even a Doctor’s standard back care regime!

I was one of the STAT registered teachers selected to teach on the ATEAM trial and have worked with many people with back pain amongst other problems that bring people to me to learn the Technique.  In Alexander lessons, people learn to use their bodies in a more balanced and less tense manner whilst performing ordinary activities, so that their backs are more aligned and able to lengthen out, which gradually reduces problems such as lower back pain.

The fact that the AT really can help reduce back pain on a long term basis was scientifically proved in the research study and the conclusions of the ATEAM Research Trial were that ‘One to one lessons in the Alexander technique from registered teachers have long term benefits for patients with chronic back pain’.