Kyphosis is the term given to an exaggerated dorsal curvature of the thoracic region of the spine. It can be a congenital condition that is present at birth.  Kyphosis can also develop, for instance, through curling over a screen for long periods of time, or by constantly bending down towards small children or work surfaces.  This curvature causes the heavy head (approx 5kg) to drag downwards, which eventually tends to hurt.  The more off balance the head becomes, the more the spine curves.  This compression tends to restrict the functioning of the lungs and other internal organs. The curvature of the upper back and chest can also put pressure on the nerves of the upper arms and contribute to problems such as RSI.

The imbalance created by this curvature in the upper body, is often compensated for by the spine which develops lordosis, an exaggeration of the lumbar curve in the lower back. This results in an obvious ‘S’ shaped appearance of the spine.

Prevention is Easier than Cure

It is often possible to prevent kyphosis from developing, if we learn Alexander Technique early enough.  Later on in the condition’s development, the AT can help free up the musculature and improve kyphosis and, importantly, reduce further degeneration.  Avoiding habits that cause compression can help enormously.

I love this sculpture called ‘The Scholar’ by Tapfuma Gusta, which I discovered in Cape Town, South Africa. It clearly shows the upper spine and body curving forwards and down, with the head pulled off balance. The Scholar presumably bent over towards his desk for years whilst writing and reading many many books. Fortunately, with the AT, we can learn how to read without putting such pressure on our bodies. 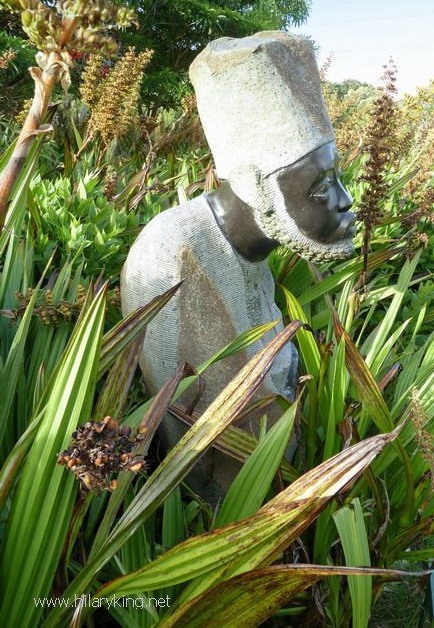